Let’s talk about Jordan Peterson and his fascination with lobsters. I have to confess I read 12 Rules for Life in less than four days, it’s just amazing.

In order to understand why, first we need to talk about hierarchies. What is a hierarchie? according to the urban dictionary: a system or organization in which people or groups are ranked one above the other according to status or authorities.

Lobsters have been in the planet for a while, and when I say a while I’m saying before the dinosaurs, they are old, old beings. What caught Peterson’s attention so much was that lobsters arrange their societies with hierarchies.

Lobsters live deep in the ocean, right at the bottom.

They also shed their carcases several times during their lives and live with soft skin for a while, so during those times they need shelter. Shelter allows the lobster to grow a new carcass and be safe from other predators. Shelter however are on demand in the lobster world and so the lobsters have to fight for them. This is how the hierarchy starts. Whenever two lobster find themselves fighting for a shelter, several things happen. They encounter each other and measure each other out to see who’s better suited to keep the shelter. Some chemicals are thrown at each other and they can know because of the chemicals: size, mood and other factors to take into consideration. If they decide to fight, it becomes a life or dead challenge, so they measure each other out just to be sure they are not making a wrong decision. This is how the hierarchy is built.

There are stronger lobsters that get the best shelters and also they get all the lobster girls as they offer shelter and show that they are better suited to procreate. What is bloody interesting is that the same substances that flow through the lobster’s nervous system,

flow as well in ours. When a  lobsters wins, serotonin flows and it makes itself bigger, demonstrating his superiority. When a lobsters loses, it makes itself little and therefore lower in the hierarchie.

Interesting isn’t it? There’s more. Pareto’s law states for many events, roughly 80% of the effects come from 20% of the causes. In lobster world this means that 20% of the lobsters get the better shelters and so the hierarchy its triangular. Sounds familiar doesn’t it?

We cannot fight the hierarchie, it something deep in our core. The lower people (or lobsters) are in the hierarchie, the more stressed and tired they are. It’s like being in a state of emergency the entire time. The rich get richer and the poor poorer.

This are strong news, there is nothing that can be done about the hierarchie, it is how we are structured. We have to play within it, there is no “outside” it is deep in our brains.

What can we do about it? I’m glad you asked, because as a stoic, there is a lot you and me can do.

“Keep this thought handy when you feel a fit of rage coming on—it isn’t manly to be enraged. Rather, gentleness and civility are more human, and therefore manlier. A real man doesn’t give way to anger and discontent, and such a person has strength, courage, 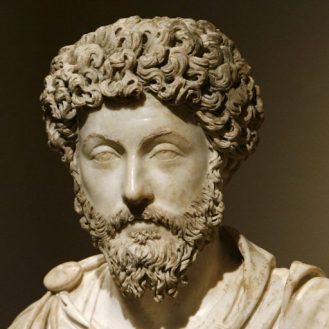 and endurance—unlike the angry and complaining. The nearer a man comes to a calm mind, the closer he is to strength.” – Marcus Aurelius

A stoic is perfectly fit for the top of thehierarchie. He is calmed and controlled. When danger or anything comes, a collected man is who we want to be our leader.

Courage, cheerfulness, inner joy. Does are the attributes of a stoic and paradoxically of the top leaders of the world. Tolerance to ambiguity and calmness define our hierarchies.

Stand up straight and with your shoulders back, that is peterson’s advice. Doing this automatically releases serotonin in ourselves and makes us lobster king immediately.

I have been watching people the whole day, thinking about this. It is true, try it yourself and you’ll notice. I was a bit weary about the whole thing, I mean, it is quite savage. Then I started thinking about everyone with more compassion, I mean, everyone is having a hard time. If you are feeling stressed, remember the stoic teachings, control what is in your control and slowly, but surely, you’ll rise like the sun.

If you are at the top, you have to be strong for others. You become literally the leader of humankind. Top lobsters can be tyrannic or benevolent but I’m sure that being at the top must be a place of courage, of cheerfulness and inner power. The top must be the example for everyone, this gives meaning to life.

Looking at your fellow human beings and knowing that everyone’s managing as best as they can, it is our duty to do as best as we can.

Stand up straight with your shoulders back. Live stoically.